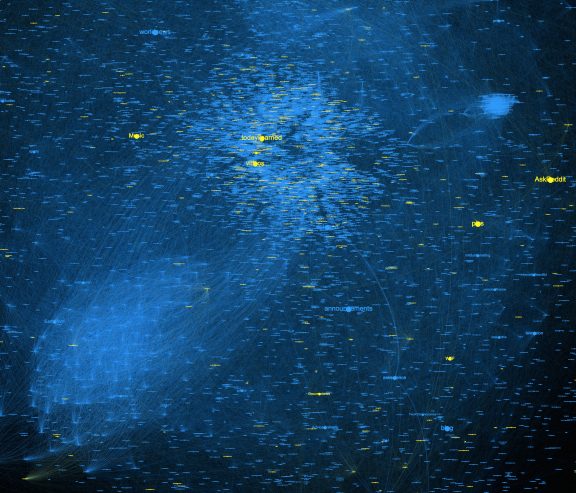 What factors lead users in an online platform to join together in mass collective action to influence those who run the platform? Today, I’m excited to share that my paper on the reddit blackout has received a Best Paper Honorable Mention from the Computer Human Interaction (CHI) conference! (Read the pre-print version of my paper here) (this post originally appeared on the Social Media Collective blog)

When users of online platforms complain, we’re often told to leave if we don’t like how a platform is run. Beyond exit or loyalty, digital citizens sometimes take a third option, organizing to pressure companies for change. But how does that come about?

I’m seeking reddit moderators to collaborate on the next stage of my research: running experiments together with subreddits to test theories of moderation. If you’re interested, you can read more here. Also, I’m presenting this work as part of larger talks at the Berkman Center on Feb 23 and the Oxford Internet Institute on March 16. I would love to see you there!

Having a formalized voice with online platforms is rare, though it has happened with San Francisco drag queens, the newly-announced Twitter Trust and Safety Council or the EVE player council, where users are consulted about issues a platform faces. These efforts typically keep users in positions of minimal power on the ladder of citizen participation, but they do give some users some kind of voice.

Another option is collective action, leveraging the collective power of users to pressure a platform to change how that platform works. To my knowledge, this has only happened four times on major U.S. platforms: when AOL community leaders settled a $15 million class action lawsuit for unpaid wages, when DailyKos writers went on strike in 2008, the recent Uber class action lawsuit, and the reddit blackout of July 2015, when moderators of 2,278 subreddits shut down their communities to pressure the company for better coordination and better moderation tools. They succeeded.

What factors lead communities to participate in such a large scale collective action? That’s the question that my paper set out to answer, combining statistics with the “thick data” of qualitative research.

The story of how I answered this question is also a story about finding ways to do large-scale research that include the voices and critiques of the people whose lives we study as researchers. In the turmoil of the blackout, amidst volatile and harmful controversies around hate speech, harassment, censorship, and the blackout itself, I made special effort to do research that included redditors themselves.

Social movement researchers have been asking how movements come together for many decades, and there are two common schools, responding to early work to quantify collective action (see Olson, Coleman):

Political Opportunity Theories argue that social movements need the right people and the right moment. According to these theories, a movement happens when grievances are high, when social structure among potential participants is right, and when the right opportunity for change arises. For more on political opportunity theory, see my Atlantic article on the Facebook Equality Meme this past summer.

Resource Mobilization Theories argue that successful movements are explained less by grievances and opportunities and more by the resources available to movement actors. In their view, collective action is something that groups create out of their resources rather than something that arises out of grievances. They’re also interested in social structure, often between groups that are trying to mobilize people (read more).

A third voice in these discussions are the people who participate in movements themselves, voices that I wanted to have a primary role in shaping my research.

How Do You Study a Strike As It Unfolds?

I was lucky enough to be working with moderators and collecting data before the blackout happened. That gave me a special vantage for combining interviews and content analysis with statistical analysis of the reddit blackout.

Together with redditors, I developed an approach of “participatory hypothesis testing,” where I posed ideas for statistics on public reddit threads and worked together with redditors to come up with models that they agreed were a fair and accurate analysis of their experience. Grounding that statistical work involved a whole lot of qualitative research as well.

If you like that kind of thing, here are the details:

To test hypotheses developed with redditors, I collected data from 52,735 non-corporate subreddits that received at least one comment in June 2015, alongside a list of blacked-out subreddits. I also collected data on moderators and comment participation for the period surrounding the blackout.

So What’s The Answer? What Factors Predict Participation in Action Against Platforms?

In the paper, I outline major explanations offered by moderators and translate them into a statistical model that corresponds to major social movement theories. I found evidence confirming many of redditor’s explanations across all subreddits, including aspects of classic social movement theories. These findings are as much about why people choose *not* to participate as much as they are about what factors are involved in joining:

Many of my findings go into details from my interviews and observations, well beyond just a single statistical model; I encourage you to read the pre-print version of my paper.

The reddit blackout took me by surprise as much as anyone, so now I’m back to asking the questions that brought me to moderators in the first place:

First of all, THANK YOU REDDIT! This research would not have been possible without generous contributions from hundreds of reddit users. You have been generous all throughout, and I deeply appreciate the time you invested in my work.

Many other people have made this work possible; I did this research during a wonderful summer internship at the Microsoft Research Social Media Collective, mentored by Tarleton Gillespie and Mary Gray. Mako Hill introduced me to social movement theory as part of my general exams. Molly Sauter, Aaron Shaw, Alex Leavitt, and Katherine Lo offered helpful early feedback on this paper. My advisor Ethan Zuckerman remains a profoundly important mentor and guide through the world of research and social action.

Finally, I am deeply grateful for family members who let me ruin our Fourth of July weekend to follow the reddit blackout closely and set up data collection for this paper. I was literally sitting at an isolated picnic table ignoring everyone and archiving data as the weekend unfolded. I’m glad we were able to take the next weekend off! <3