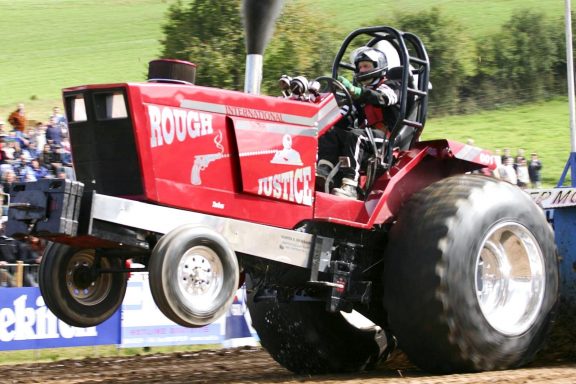 What does it mean to own your vehicle, when tech companies use copyright law to control who has the right to open it up, make repairs, and change how it works? And what can we do about that?

Speaking today at the Cornell Communication department is MC Forelle (@mcforelle) a Cornell Presidential Postdoctoral Research Fellow, based at Cornell Tech in New York City. There, she studies the legal and technical obstacles faced by users, tinkerers, and repair communities working to repair, maintain, and modify software-embedded consumer technologies. Her work broadly examines the intersection of law, technology, and culture, with particular interests in materiality, sustainability, and practices of resistance and change.

MC takes us back to 2015, when John Deere made headlines for the assertion that every farmer that bought one of their software-embedded tractors weren’t actually the owners of the tractor software but just a licensee. The company barred farmers from making repairs or modifications unless it was done by a John Deere mechanic. John Deer wasn’t the only company arguing that consumers shouldn’t be allowed to access software. These groups were arguing for their intepretation of the Digital Millennium Copyright Act. This law prohibits circumvention of copyrighted software. The law was designed to protect movies and music, but it’s broad enough to apply to any device with software, including insulin pumps, cars, and even tractors.

Although copyright was originally designed to benefit the public, MC tells us, courts have privileged the interests of corporations. She promises to introduce basics of copyright law, discuss how it applies to software, and then how software copyright is shaping how ownership works more widely.

MC tells us that something akin to copyright is written into the U.S. Constitution, which says that “to promote the progress of science and useful arts, by securing for limited times to authors and inventors the exclusive right to their respective writings and discoveries.” Early in U.S. history, copyright applied to expressions of ideas, but not the ideas themselves. The goal was to promote and preserve freedom of expression while giving people incentives to contribute to culture, the arts, and invention. MC tells us about debates between Madison and Jefferson over copyright. But none of them talked about copyright as property.

How does the law think about software? On one hand, software is a functional object, which copyright does not cover. On the other hand, software is also a form of expression, which copyright does apply to. In the 1970s, the National Commission on New Technological Uses of Copyrighted Works, the committee reluctantly suggested that the government permit people to copyright software. They worried that copyrighting software would push copyright beyond the breaking point, but that software should indeed be protected. They pointed out that:

Much later in 1998, Congress passed the Digital Millennium Copyright Act (DMCA), largely informed by the movie and music industries who wanted to close any loophole that would allow circumvention of copyright-protection software (Litman 2003). But Congress was worried that the law could be over-broad. So they created an exemption process. Every three years, the public could petition the Library of Congress to be given the right to violate the provisions of the law. To gain permission, people would need to prove three things:

That’s how John Deere entered a controversy with the people who bought their tractors. Tractor owners argued that they bought the tractor, so they own it. Furthermore, the tractor and the software couldn’t run without each other. If the function was inextricable, so is ownership status. Finally, they used an experiential argument; if you have the right to sell, give, or destroy the tractor, then you effectively have ownership of the tractor. Auto manufacturers argued that ownership is not the default. It must be established by contract, otherwise it does not exist. Since they never granted ownership over the tractor and its software, then the owners of the tractor could not be said to own it, and that instead, they had a license.

What is an essential step?

U.S. law allowed exemptions to the DMCA if people needed to take some kind of essential step to repair or modify it. Tractor owners argued that making repairs and upgrading their tractors are basic parts of making the tractor work for farmers. That’s also true for car ownership, where making repairs and modifications are essential parts of car ownership, as per the American ideal. Nobody in America imagines owning a car without having the ability to repair it themselves or modify it themselves. The opponents to the exemption basically said “No. That’s not true.” Since the burden of proof was on Tractor and car owners, they didn’t have to respond to this argument. The auto manufacturers were strategically silent about the multi-billion dollar auto aftermarket business that relies on the ability to make repairs and modifications.

What is an adverse impact?

Advocates argued that the DMCA would harm the income prospects of individual farmers, as well as hurt small businesses that made a living from repairs. They also argued that American culture holds a strong value in maintaining and repairing cars, that copyright enforcement would reduce the enjoyment of car and tractor ownership. Opponents said that advocates couldn’t demonstrate these impacts.

What about the public interest?

Auto and tractor companies made a further argument. They argued that if an exemption to DMCA was granted, that it would mostly be used by people to circumvent emissions regulations and drive their cars too fast—that allowing people to repair their cars would make them less safe.

MC tells us that these debates tended to put two issues in conflict. Both sides argued that economic interests were at stake— whether the interests of vehicle companies, or the economic interests of farmers and small businesses. A second debate centered over individual rights and the autonomy to determine how one’s devices get used (repaired, maintained, modified).

MC points out problems with these arguments. First, the tractor and car companies never argued that they needed to limit repair and maintenance in order to carry out ongoing innovation— even though that was the purpose of this part of the constitution.

The autonomy argument also has weaknesses, says MC. To be legible to the copyright office, advocates needed to explain the issue as a question of individual, personal interests rather than community interests. MC tells us that car culture has a strong belief in rugged individualism and personal freedom. For some people, protections that benefit the community at large (like environmental protections) are a form of tyranny. By adopting this frame, advocates opened themselves up to concerns from auto/tractor manufacturers about the potential impact on the environment.

What can we do about this?

MC tells us that we need to reform the DMCA and copyright law so that it works better for libraries, disability communities, and the repair/maintenance sector. For example, Pamela Samuelson’s has argued for Freedom To Tinker, which might be a better way to think about these issues beyond ideas of repair and modification. But even as we try to do that, we need to re-imagine the idea of ownership and property to better understand the impact of our systems on collective outcomes. MC tells us that stewardship over our things is something that we owe to each other as society depends on sustainable living.