The Many Faces of Online Platforms: Chinmayi Arun at the Platform Governance Research Network 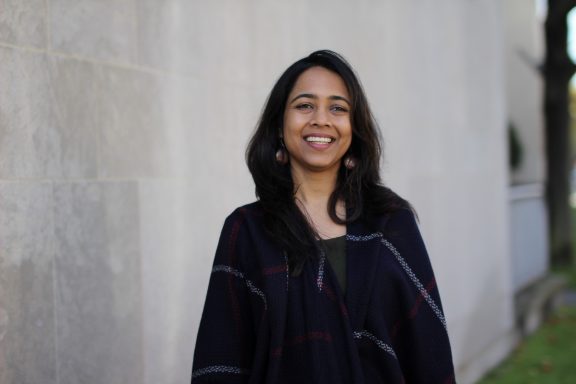 What does it mean for a tech company to say something, do something, or take a position on a policy? What do we lose by thinking of companies as policy actors with consistent positions?

Internet platforms are complex organizations with many faces, and the emerging field of platform governance must therefore embrace a diversity of global perspectives. This was the provocation from Chinmayi Arun, a resident fellow at Yale Law School, that launched the first conference of the newly established Platform Governance Research Network on Tuesday.

Chinmayi evoked striking imagery to make her point. We often think of platforms as if they are Janus, the two-faced god from Greek mythology, with one face presented to users and one toward governments. But Chinmayi argued that our metaphors need more faces, drawing instead on depictions of Indian gods with many heads.

For example, platforms do not present a single, unified face toward all governments, and they engage with states at multiple levels and on many regulatory issues. Internally, there are a multitude of teams each with their own point of interfacing with governments. Nor do they treat all groups of users equally. Chinmayi pointed out that civil society groups in Myanmar raised warnings with Facebook for years, but they couldn’t get through to the right people in order to influence platform policies, and the people they were able to talk with weren’t equipped to understand their concerns.

But she went on to say that publics can influence each other; Myanmar civil society couldn’t get through to Facebook, but they could get through to the UN and journalists at the New York Times, organization that Facebook does pay attention to. People who initially appear powerless can therefore find new avenues affecting platform policies.

Finally, Chinmayi argued that critics of platforms tend to assume that they are singular and unified, ignoring this complexity. There are people and teams within platforms that attempt to advance human rights and the concerns of marginalized users. A complete picture of platform governance must scrutinize all of the faces of platforms.

Anne Cheung and Tarleton Gillespie provided responses to Chinmayi’s talk. Anne, a law professor at the University of Hong Kong, pointed out that Facebook demonstrated with its suspension of a sitting US president that it has the power to set standards for free speech, a power beyond the normal responsibilities for a corporation, and there are no existing mechanisms for holding them accountable. From the perspective of procedural justice, Anne argued that Facebook sets, applies, and reviews its rules.

Tarleton, a principal researcher at Microsoft Research, endorsed the metaphor of faces to push back on the field’s tendency to singularize platforms. And while he pointed out that complexity should temper some criticism of platforms, complexity can also be used strategically to deflect criticism. Facebook delicately places content moderators on the edge, positioning them as part of Facebook when they want to celebrate progress in moderator and presenting them as external, third-parties when facing criticism over worker conditions.

He went on to propose that our work as researchers is to interrogate these faces, but also to practice refusing the terms crafted by platforms and to develop a new language. This led to a warning for the new research network: when a field defines its research around a particular object, like the “platform”, it can end up holding that term in place because it justifies the field’s existence. This risks prioritizing the perspective of the people and institutions that created the term.

Chinmayi ended her talk with an endorsement of the research network, saying that if we are to put together the puzzle of the many-faced platforms, we must create spaces for sharing knowledge and perspectives across disciplinary and geographical boundaries.